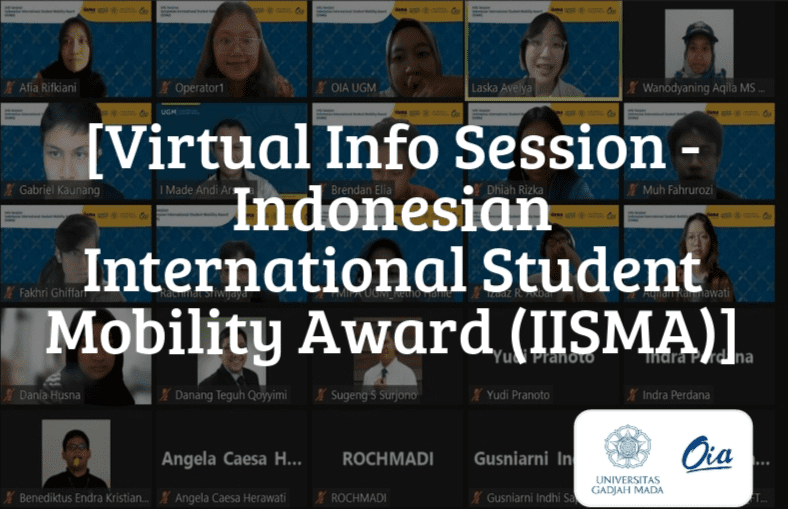 Indonesian International Student Mobility Awards (IISMA) is a program held by the Government of Indonesia where students attend mobility programs in universities partnered with the program abroad. This info session aims to give students wanting to join this program more information about the program itself. The event started with our moderator Laska Avelya who gave a brief rundown on what’s going to happen in this virtual info session.

After the introduction from the moderator, The head of OIA I Made Andi Arsana gave his opening remarks and greeted the guest speaker R. Rachmat A. Sriwijaya who we will get to later. Pak Andi continues to explain who Pak Rachmat is and his role in UGM. He continues to talk about UGM’s results in the last IISMA affirming the fact that UGM has the most IISMA awardees out of all institutions of higher education, wishing the same can be said for IISMA 2022. Pak Andi then talked about the importance of international exposure encouraging students in UGM to participate in international programs due to the benefits, referencing experiences from 2021’s IISMA awardees. However he prefaced that this year’s program may be more strict due to the program’s popularity. His advice to future participants to prepare every aspect of themselves from academics, language and to build a strong mentality. At the end he said we cannot truly be “citizens of the world” without actually experiencing the world following up by restating UGM’s slogan, “Locally Rooted, Globally Respected”.After Pak Andi’s opening remarks everyone attending the event took pictures together.

We then go to one of our main speakers R. Rachmat A. Sriwijaya, S.T., M.T, D.Eng from the Ministry of Research and Technology. His talk is what most of us were waiting for, which is the socialization of next year’s IISMA program. He starts off by explaining what IISMA is then explaining that this program is for students between fourth and sixth semester who will then start the program in their fifth and seventh semester respectively. Pak Rachmat then proceeds to explain the laws and foundations where IISMA is built on and also reveals the program to be worth 20 credits for students. He also reaffirms that students must fulfill the requirements to be able to join the program.

Pak Rachmat continued to give more specific details regarding the IISMA program. This program is directly from the ministry of education and as mentioned before the program is open only for students between semesters 4 and 6 who will then start the program in their next semester and only available for undergraduate students. The program will start in February and registrations will start in March where students can choose up to 73 universities offered in 30 countries across 4 continents. “The selection process will be fast,” said Pak Rachmat who then continues to talk about the universities partnered with the IISMA program which includes high ranked universities like the University of Pennsylvania and Nanyang Institute of Technology and other top ranked universities like the University of Michigan, Korea University, and others.

Pak Rachmat continued to explain specific statistics on the awardees of 2021’s IISMA program. Last year’s batch had 1000 awardees however not all awardees went abroad due to a few countries like Singapore still closing its borders. Pak Rachmat continues by giving the premise of how IISMA is conducted which are Industry 4.0, emancipated learning where learning abroad helps your academics, internationalization, and the pandemic. He then continued by giving more reasons for students to participate in IISMA which ranged from credits recognition, experiencing new cultures all the way to developing international networks. The funds covered by IISMA are brought up where expenses are covered by the program which are: registration and tuition, living costs and accommodation, emergency funds, economy airfare, and costs related to COVID-19. What came after this were the requirements for the program which are as follows:

He continued to clarify a few things that the program only accepts IBT for TOEFL and not ITP and that Duolingo is still tentative as not all universities accept it.

Pak Rachmat then talked about the entire process when going through IISMA as the process starts from searching the university of choice all the way to checking to see if candidates succeed in the selection process. The timeline was then discussed as the timeline is until December 2022. He then explained that there are 10 subjects offered from the universities with students being allowed to pick between 3 and 4 subjects on their own. Pak Rachmat then showed pictures of 2021’s awardees and delved further into the statistics showing the acceptance rate, average english scores, average GPA and others. His talk concluded with him showing pictures of awardees. What followed was a Q&A session where Pak Rachmat answered questions from participants of the info session.

Mas Fakhri then gave a presentation on his experiences in the IISMA program entitled, “How a Semester Abroad Turned Into a Journey of Understanding Better,” commenting on how cliche the title is but assuring participants that it truly reflects his experience. He explained the background of IISMA and Boston University then the importance of international mobility. Talking about the benefits of studying in Boston due to the city being a student city he gets to meet many people from around the world. He then talked about his experiences in the US from journeying around the country to the culture there. Due to the different culture, he mentioned that he learned a lot of things, developed his personality more and gained better qualifications.  He closed his talk with a quote from Barack Obama which says, “We are the change we have been waiting for.”

The next talk came from Mba Dhiah. She is also an awardee who got accepted to the University of Warsaw in Poland. She started her talk by explaining her experiences in the registration process, saying that future participants must be ready to prepare everything in a short amount of time and made it clear the importance of keeping up with other awardees during this process. She then talked about culture shock as she experienced many cases from commuting to daily life as she commented that things were more aimed towards self-service. However she made it very clear that the people around her from fellow students to her professors are very supportive and understanding of her current condition. This makes for a wonderful academic atmosphere for Mba Dhiah.

After both of their sessions they were then asked by participants about their experiences and advice for IISMA.

The last session was presented by Schoters representative Ihsan Nur Iman Faris. During his talk he offered the services of Schoters, a group that helps students to be able to study abroad. His presentation discussed many topics which included choosing the right English proficiency test to take, comparing each English proficiency test IELTS/TOEFL iBT/Duolingo, and overall advice when taking these tests.